Rye is a grain that’s closely related to barley and wheat yet is a dieter’s best friend. Its edible seed kernels, referred to as rye berries, are used to produce rye flour that offers many slimming benefits. In most grains, the fibre is found mostly in the outer bran layers of the kernels and is lost during hulling. With rye, a significant amount of fibre remains in the inner part of the grain (endosperm) which means it makes a bread that is more filling than wheat grain breads.

Research suggests that eating rye bread for breakfast reduces hunger before and after lunch compared with eating wheat bread. It also has a low glycemic index which helps to reduce swings in blood glucose levels. Try including rye bread in your diet for two weeks and notice the difference – whether you want to lose weight, or prevent weight gain.

Rye bread has a high protein and fibre content. Rye protein helps to suppress appetite through metabolic effects on hormones involved in appetite control. Rye fibre also helps you feel full as it has a bulking effect to delay stomach emptying which also prolongs satiety through early signals involved in appetite control. Rye fibre also has a great ability to bind water to further promote fullness and satiety.

In addition, rye fibre is broken down by bacteria in the large bowel to release fermentation products that have beneficial effects on the liver function, and which boost cell metabolism and suppress appetite.  All these effects are very different to those seen when eating wheat bread.

As rye is low in gluten, rye bread is also less likely to cause bloating than wheat bread. Check ingredient labels if you want 100% rye flour products, however, as some rye breads include up to 50% wheat flour. NB Although rye is a low gluten grain, it does contain some gluten and is not suitable for people with gluten intolerance or coeliac disease.

How effective is rye bread for weight loss?

Researchers from Lund University in Sweden have found that eating rye bread for breakfast significantly reduces appetite so that 16% fewer calories were eaten at lunch. What’s more, the suppression of appetite continued well into the afternoon. This helps to curb both mid-morning and mid-afternoon cravings so those taking part ate significantly less over all.

In another study, a group of 55 obese men and women followed an 8-week weight loss program followed by a 12-week weight maintenance phase, during which all included rye bread in their diet. Half the volunteers received plain rye bread, while the other half received rye bread to which green tea extracts were added (to provide an average of 200 mg of catechin polyphenols). By the end of the 8 week weight loss phase, average weight loss across all groups was 7.3 kg. The addition of green tea polyphenols resulted in an additional significant reduction in waist circumference of a 1.22 cm. So, if making your own rye bread, consider adding some matcha tea powder!

People who eat whole grain rye products or dark rye bread during breakfast have better glucose control and insulin sensitivity, helping to reduce the risk of diabetes.  Other studies show that people with metabolic syndrome (a combination of heart disease risk factors such as obesity, high blood pressure, raised glucose and triglycerides) who ate rye products for 12 weeks had improve glucose and insulin responses, with less inflammation than when following a diet that included oats, wheat bread and potatoes.

Some evidence even suggests that whole grain rye products can reduce the risk of cancer due to their high content of antioxidant polyphenols, soluble and insoluble fibre, resistant starch and other beneficial plant substances (phytonutrients) – especially lignans. In one study involving men with prostate cancer, those who ate 295g rye bran bread per day for 3 weeks, had significantly increased immune destruction of prostate cancer cells compared to a similar group of men eating wheat bread.

How to add rye to your diet

Rye bread is increasingly available, but avoid those made from heavily processed ‘white’ flour and go for the dark versions made using the whole grain. The rich, sweet, dark, German pumpernickel is especially tasty and nutritious as it is made from coarsely ground rye flour and, sometimes, whole rye berries. Rye is also used to make crisp bread such as Ryvita, of course, which is one of the most popular diet foods ever!

To cook rye berries, place them in a pan with plenty of water. Cover and simmer until tender (around 1 hour). For a really tender texture, first soak the rye berries overnight then cook them for much longer, two to three hours. 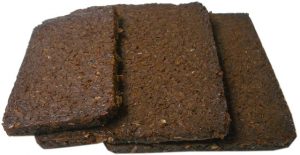 The best weight loss benefits come from the darkest rye breasts. If the outer hull (bran) is removed form rye berries before milling, it produces a creamy white, or light, rye flour. Medium rye flour includes a higher percentage of the bran, while dark rye flour (or meal) is made from the whole rye berries.

Pumpernickel flour, or meal, is a whole grain rye flour that is coarsely ground and may contain chopped or even whole rye grains, too. If you’ve not tried pumpernickel bread you are in for a real treat – moist, nutty and filling, it makes a great base for an open sandwich.

If making your own rye bread, experiment with adding a tablespoon of turmeric, macha green tea, cinnamon and raisins, nuts, or garlic and herbs.

Pumpernickel bread is great for making open sandwiches, for serving hors d’oeuvres, or as the base for pizza toppings. Here are our favourite toppings for rye bread or rye toast.

Avocado & Poached Egg: Mash half a small ripe avocado, season with black pepper and pile onto rye bread or toast. Top with a poached egg.

Baked Mushroom and Camembert Toasties: Spray the base of a flat mushroom with olive oil and place, stalk-side up, on a non-stick baking tray. Sprinkle with crushed garlic, fresh thyme and ground black pepper. Top with a chopped tomato and bake (1800C) for 10 mins. Add a layer of thinly sliced Camembert cheese and return to the oven for 5 mins until the cheese is melting.

For added sweetness, sprinkle with a stevia-based low-cal sweetener if needed.

Melon and Ham: Wrap a slice of cantaloupe melon with thinly-sliced ham and cut into slices. Spread rye bread or rye toast with low-fat fromage frais and arrange the melon/ham slices on top. 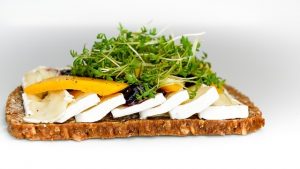 Smashed Avocado: Simply mash half a small ripe avocado, season with black pepper and lemon juice and pile onto rye bread. You can add chopped chilli, spring onions (scallions) or crème fraiche too.

Ricotta & Spinach: Mix a small tub of low-fat ricotta cheese (or cottage cheese) with some diced red bell pepper and a handful of baby spinach leaves. Pile onto Rye bread.

Bacon, Cranberry and Brie: Grill a rasher of lean, smoked bacon until crisp, then crumble into pieces. Spread Rye toast with some low-sugar, cranberry sauce. Top with thin slices of brie and warm under the grill until beginning to melt. Sprinkle with the chopped bacon and garnish with parsley.

Guacamole and Red Pepper: Mash a ripe avocado with a little low-fat crème fraiche and a dash of lemon juice. Add chopped spring onion and parsley. Pile into an iceberg lettuce leaf shell and serve on Rye bread. Garnish with slivers of red bell pepper.

Tuna & Sweetcorn: Mix a small tin of tuna (canned in spring water) with sweetcorn and chopped red bell pepper. Season with a dash of balsamic vinegar (or salad cream) and spoon into an iceberg lettuce leaf shell. Serve on Rye bread. Garnish with parsley.

Summer Egg Spread: Mash a boiled egg with a little low-fat salad cream and spread onto Rye bread. Season with black pepper and garnish with parsley.

Hot-Smoked Salmon Spread: Mash hot-smoked Scottish salmon with a squeeze of lemon juice and some low-fat crème fraiche. Spoon into an iceberg lettuce leaf shell, and serve on Rye bread with slices of cooked beetroot (fresh or pickled) on the side.

Walnut & Coriander Paté: Lightly toast a handful of walnuts and sesame seeds under a grill (5 mins). Grind (or bash in a mortar and pestle) to you preferred texture. Bind with some low-fat cream cheese, some freshly chopped coriander leaves and a dash of truffle oil (optional). Serve with Rye toast soldiers.

Chicken Satay: Marinade cubes of chicken in equal parts soy sauce, lime juice and olive oil (eg 1 tablespoon of each).  Grill, BBQ or bake (1800C) until cooked through. Sprinkle with chopped coriander leaves, and serve on a slice of Rye bread.

Classic Welsh Lamb: Spray a Welsh lamb fillet/chop with olive oil and roll in freshly chopped rosemary, garlic and freshly-ground black pepper. Grill or BBQ until cooked to your taste (pink or well-done).

Turkey Burger: Moisten a slice of Rye bread with water and squeeze out the excess. Combine with 100g minced Norfolk turkey (or lean beef), a sliced shallot, chopped fresh herbs (parsley, thyme) and a small beaten egg. Season with black pepper and either mix by hand, or blitz in a processor. Form into one large, or two small burgers, and grill or BBQ until cooked through.

Classic Chicken with Sage and Onion Stuffing: Make the stuffing by processing a slice of Rye bread to make crumbs. Add a handful of chopped, fresh sage leaves, thinly sliced spring onion and bind together with a little low-fat crème fraiche. Season with freshly-ground black pepper. Roll into small balls. Spray the chicken breast with olive oil and grill, BBQ or bake (1800C) the chicken and stuffing balls until cooked through. Skin the chicken before eating to reduce fat and calories.

Fennel Bass Steak: Spray a fresh sea bass (or other fish) fillet with olive oil. Roll in a mix of chopped garlic, fennel seeds, fresh dill leaves and lemon zest. Grill or BBQ until cooked to your liking (ie just seared, pink in the middle, or cooked through).

Halloumi Kebabs: Cut a portion of halloumi cheese into cubes. Thread onto skewers with button mushrooms, squares of red pepper, chunks of courgette and cherry tomatoes. Spray with a little olive oil and roll in chopped fresh herbs and garlic. Grill or BBQ until the vegetables are just cooked and the cheese turning golden. Serve on a slice of Rye bread.

Halloumi Pesto: Liquidise a handful of fresh basil, 50g pine kernels, 1 tomato and a little olive oil. Season with black pepper. Place slices of grilled or BBQ’d halloumi cheese on Rye bread and drizzle with the home-made tomato pesto sauce (or use bought if you prefer!)

Cinnamon Ratatouille: Sauté thin slices or red onion, aubergines, courgettes, red and green peppers with some garlic. Add a freshly chopped beef tomato,  a squirt of tomato puree, a dash of white wine and sprinkle with cinnamon (or if you prefer, fresh herbs) to taste. Serve on a slice of Rye bread or rye toast.

Make your own rye bread recipe

Pumpernickel bread is widely available, but if you want to make your own, the best and most authentic Pumpernickel Rye bread recipe we have found is here. 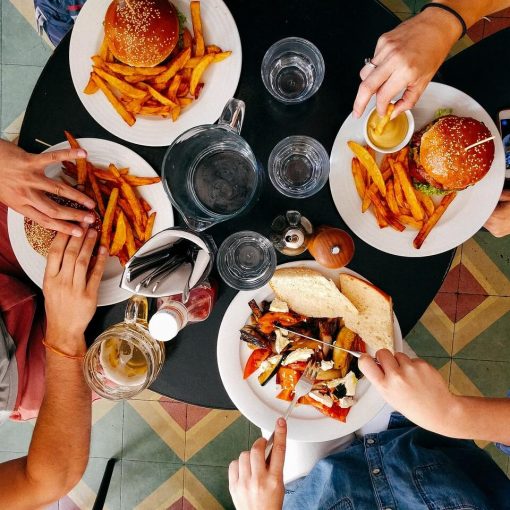 According to a study published in the online journal BMJ Open eating slowly can help you lose weight, especially if you also […] 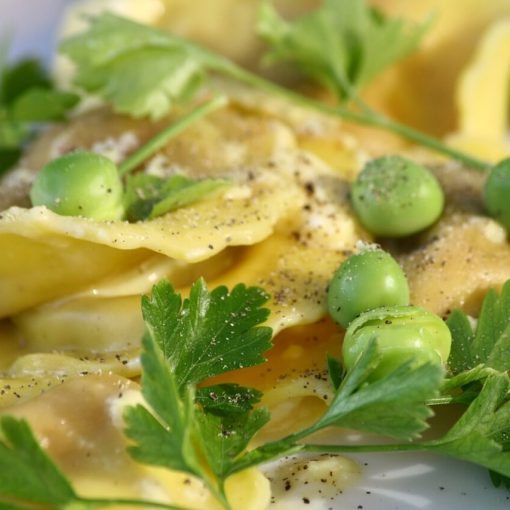 If you love pasta, then we have good news and bad news.  The bad news is that traditional pasta, in traditional large […] 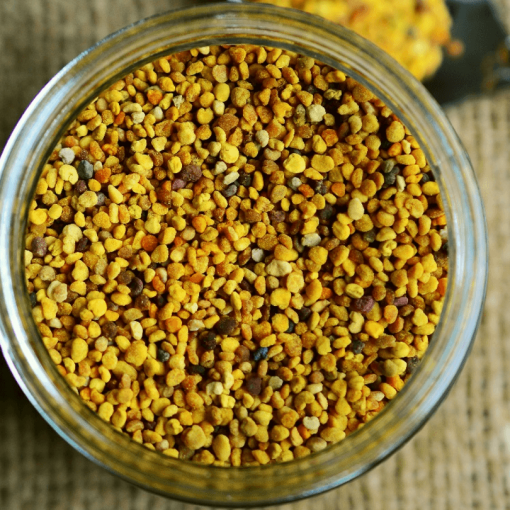 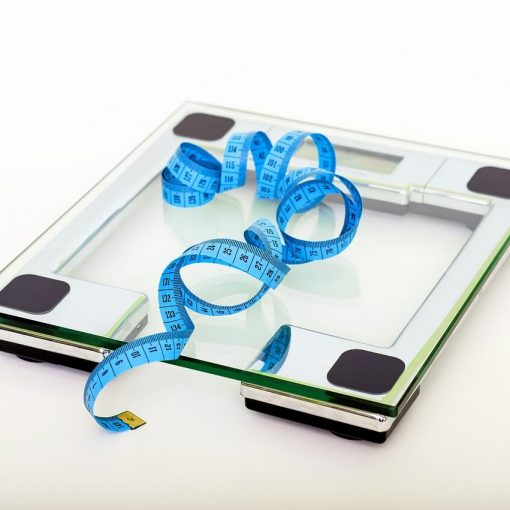 Although, monitoring your weight is useful to keep you on track, and to highlight whether or not you are maintaining weight, piling […]